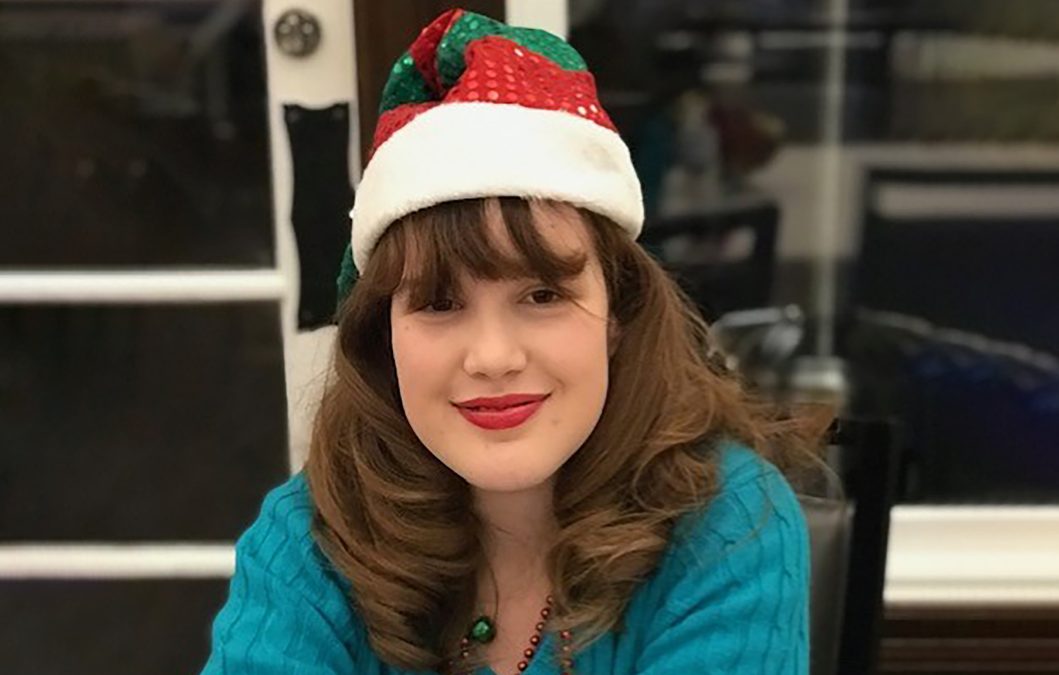 “I learned a long time ago the wisest thing I can do is be on my own side, be an advocate for myself and others like me.”

According to estimates from the Centers for Disease Control and Prevention’s (CDC) ‘Autism and Developmental Disabilities Monitoring Network’ (ADDM), approximately 1 in 44 children in the United States are diagnosed with an Autism Spectrum Disorder (ASD). Most children are reliably diagnosed as early as age 2, which was the case for Elizabeth Griswold. Now a Junior at California State University-Long Beach, Elizabeth felt compelled to share, for the first time, her story and journey living with ASD.

When Elizabeth was first diagnosed with ASD, her parents – like many young parents who learn for the first time their child has autism – were overcome with fear and insecurity. Elizabeth’s parents feared they lacked the resources and education to provide the best support for young Elizabeth. At the time, ASD was not commonly talked about; they were unfamiliar with the diagnosis and there were few resources available. As Elizabeth got older, doctors advised Elizabeth’s parents to enroll her in a specialized school where her ASD would be the focus, however, they refused to deprive their daughter of a public education experience – a decision that would become a driving force in Elizabeth’s later years.

Elizabeth’s upbringing was that of a ‘typical’ American child. She was raised alongside her older brother, whom she’s very close to these days, and each had chores and rules to follow. “Because of my autism,” Elizabeth shared, “I take things very literal, and I will enforce rules. I’m a huge rule follower, since childhood.” Elizabeth has always relied on rules and routines to keep her environment predictable and safe, she proudly admits that she has never broken a single rule, even when pressured by her friends growing up. 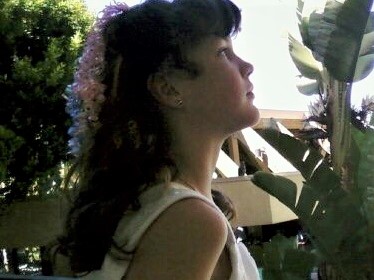 A photo of young Elizabeth

High school was Elizabeth’s defining moment. “I didn’t care about fitting in,” said Elizabeth, “because I wanted to know and chase what was best for me, I needed to advocate for myself. Not until I got into high school I realized I needed to advocate for myself.” While attending Paloma Valley High School, in Menifee, California, she noticed how different her special education classes were compared to those her friends were taking in their general education program. Even though they attended the same school and were the same age, her friends were completing different assignments, reading different books, and submitting different homework. Elizabeth’s classes were not challenging her, she remembers how easy school was, and how bored she’d become. Early in her freshman year, she expressed her concerns to her parents who listened, supported, and encouraged her to speak up. Elizabeth requested to be placed in regular education classes in one of her Individualized Education Plan (IEP) meetings. After listening to Elizabeth’s concerns and career goals, her IEP team agreed that Elizabeth belonged in general education classes.

No longer in special education, Elizabeth felt proud of her self-advocacy and the opportunity she had just created for herself. Growing up an introvert, Elizabeth never imagined she’d be advocating for herself, especially before school administrators. It was with her parents’ support that she was able to find her voice. She now felt she had to prove she belonged in general education classes by exceeding all expectations. Senior year, Elizabeth was faced with a challenge: Being in special education her first year of high school, she not only had to earn her senior credits she also had to make up for her freshman credits before graduating. “I cried and was worried I wasn’t going to graduate or get a diploma”, Elizabeth recalls. Everyday she had to remind herself of her goals to keep pushing herself closer and closer to the finish line. Aside from her family, Elizabeth also had teachers rooting for her along the way. “My teachers were so helpful”, Elizabeth said, “they always encouraged me to challenge myself and question everything. Mrs. Owens was my beacon of light, she made me who I am today.” Mrs. Owens was Elizabeth’s high school math teacher. After many tireless nights, Elizabeth went on to graduate from Paloma Valley High School with a California stamp on her diploma, an honor given only to the top 100 students in her school.

While transitioning out of high school, Elizabeth worked with IRC’s Employment Specialists who prepared her and connected her with potential employers. She is now working her second year as a barista at a local Starbucks. Elizabeth’s tendency to follow rules and routines often caused challenges as she transitioned into adulthood, “I had to learn to calm myself and cope with changes like the bus being late and making me late to work. I learned to cope with set-backs by coaching myself through them, I’m grateful for my mom that she didn’t do everything for me growing up, because this thought me to figure out things for myself.” 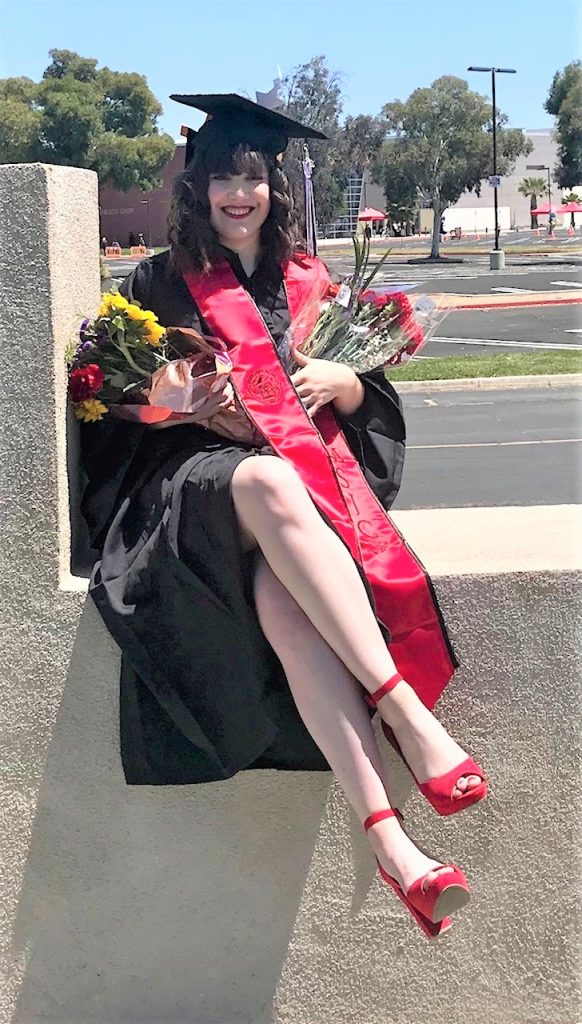 After graduating from Mt. San Jacinto College with her Associates Degree in Liberal Arts, Elizabeth applied and got accepted into California State University-Long Beach. She is currently working towards her Linguistics degree, specializing in American Sign Language (ASL). Elizabeth’s dream is to become a music interpreter for the deaf and hard of hearing community. She was first introduced to ASL back in high school, her family decided to take ASL courses to improve on communication, after her brother’s inner ear surgery resulted in partial hearing loss. Elizabeth remembers falling in love with the ASL community and the language itself. After discussing this newfound love with her mother, she decided to pursue ASL interpretation. Her goal is to interpret music all around the world, “Music is beautiful. I want to teach non-verbal children ASL – they have the right to communicate and appreciate music too.”

Elizabeth makes it no secret that she continues to struggle with social skills, but her awareness and diligence has brought her a long way. She struggles with social cues, knowing when and how to talk or be around people. She becomes overstimulated when being around too many people. Since starting college, however, Elizabeth has noticed an improvement in her social skills and her confidence has increased. Living away from home, working, filling out financial aid forms, and being responsible for her school schedule has helped her gain independence. Elizabeth admits she gets overwhelmed at times – as any college student would – however, she hesitates to ask for help because she feels asking for help will reinforce the negative stereotypes some may have for people living with Autism.

“I would tell people I have Autism”, said Elizabeth, “but had to explain that I was a ‘woman with autism’ and not an ‘autistic woman’ because Autism doesn’t define me.”

“When I was little, I had to explain to my peers what Autism was, because it was unheard of then. Growing up I felt like I only had Forrest Gump to look up to,” Elizabeth shared. “We need more role models to look up to and everyone, with or without a disability, has a story and something they struggle with. I was blessed with a great support system, family, parents, and peers. You have a right to an education, but understand it’s going to be hard– there’s going to be times when teachers wont understand and will get overwhelmed.” Elizabeth continues, “If someone doesn’t fit into your mold, try and listen and understand that that person is a unique individual, see what they are capable of and don’t worry about little things. Get to know them and don’t compare them to other kids. Learn and grow from it.”

Elizabeth’s caseworker, Kathrene Henderson, had this to say, “I have had the pleasure of being Liz’s CSC for over 5 years now. When I first met Liz, she was a very pleasant and driven young lady. Liz was in high school at the time she was working on her Black Belt in Karate, which she accomplished. Liz discussed with me future goals, such as wanting to receive her ASL degree and then to attend Cal State Long Beach. Everything Liz set out to do she has achieved. Liz is a very compassionate, aspirational, and humble young lady. Her mom and her family are a great support system for her, and I am blessed to be Liz’s CSC. The best is yet to come for Liz and I am so excited for her future.”

We are so proud of you Elizabeth and cant wait to see you achieve all of your dreams!