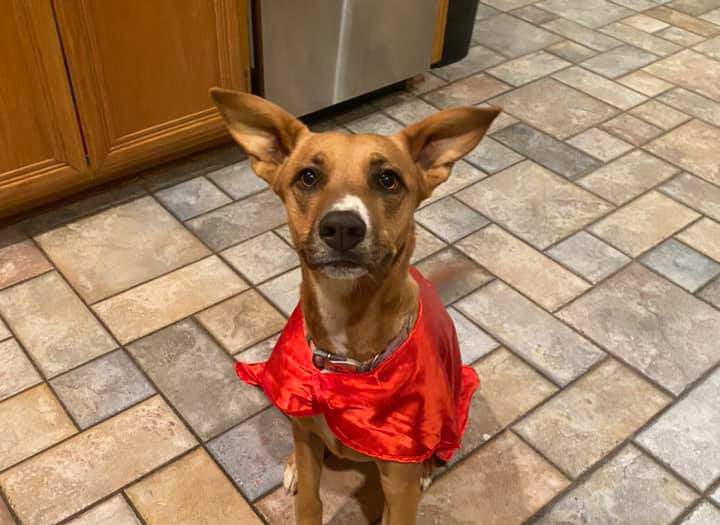 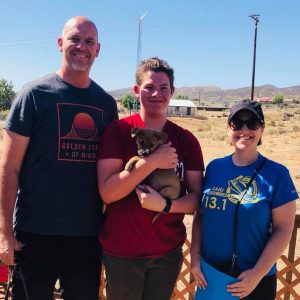 Emotional Support Animals (ESA) are on the rise and it’s important to understand that ESA and Service Animals fall under two different categories. Service Animals have been formally trained for a job, from guiding the blind to watching over someone who suffers from epilepsy, which is why they are so important. Service Animals are also protected under the Americans with Disabilities Act (ADA) to go just about anywhere they are needed with their human companion. In contrast, an ESA does not necessarily undergo formal training for a specified task but does serve a purpose in being a source of comfort, reassurance, and safety for their owners. Unlike a Service Animal, an ESA has limitations as to where they can go and may not be protected under the ADA. 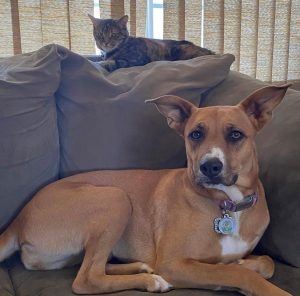 Ivy sharing the couch and striking a pose with fellow roommate, Fitz the cat.

Three years ago, the Cook Family decided to get their very own mood-boosting pup, Ivy, and officiated her as their emotional support animal. CJ Cook, IRCs Community Engagement Manager and Ivy’s owner shared, “after our beloved Black Lab, Zoey, AKA Mama Dog, passed away at 13 years old, we decided to explore a new pet. Zoey helped our son Joey as a child when he struggled with hemophilia and the injections he had to take when he had a bleed. We wanted to find a loving dog who we could train to help others the same way Zoey helped us.” Hemophilia is an extremely rare disorder in which the blood does not clot due to insufficient blood-clotting proteins. This results in bleeding for a longer time after an injury, easy bruising, and an increased risk of bleeding inside joints or the brain. There are treatments that can help manage the condition but there is no known cure at this time. 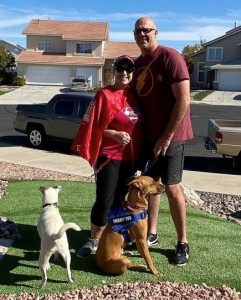 (From left to right) Charlie’s behind, Betsy Cook, CJ Cook, and Ivy’s good side heading off to the ASIE Superhero Walk

Ivy’s story is not one without a struggle. “Ivy was rescued from a car at a Stater Bros. in Phelan and taken to a local rescue”, CJ recalls, “when we decided to adopt, we looked at local rescue websites, saw a picture of Ivy, and fell in love.” Ivy was adopted by the Cook family at only 8 weeks old and immediately began her training to become an ESA. Ivy, the German Shepard/Rottweiler mix, is trained to provide affection, comfort, and support to people in settings such as hospitals, retirement homes, nursing homes, schools, libraries, hospices, or disaster areas. Ivy now has a loving home and a bright future ahead of her. Dogs, much like their owners, have distinct personalities that many times shines through with the other animals in the home. Ivy shares her space with a Jack Russell Terrier, Charlie, who is unfaced by Ivy’s playful antics. “We have an older Jack Russell named Charlie,” CJ shared, “which Ivy loves to tease by getting as close to his face as she can, without touching him, while maintaining eye contact”. One can almost hear Ivy saying “I’m not touching you” over and over again to poor Charlie. 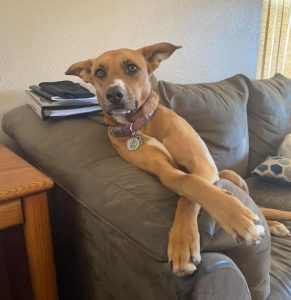 Ivy doing what she does best, giving her undivided attention.

One thing to keep in mind, like any other animal in the home, Emotional Support Animals require tons attention and need loving, dedicated, and responsible owners. Owners are responsible for feeding, maintaining, providing veterinary routine care, and provide basic training in commands to ensure their ESA is well behaved in public spaces.  Thank you to the Cook family for opening up their hearts and home to Ivy! 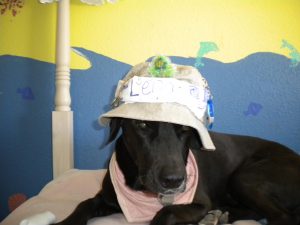 We love to hear from our community! If you have a Service Animal or an Emotional Support Animal and would like to share your story, email us at [email protected]